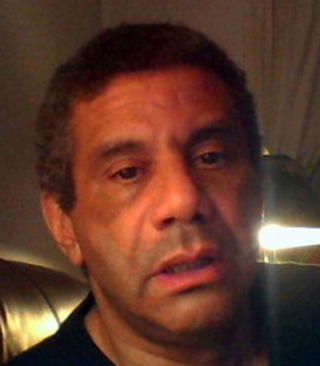 Both Novels Available in All Formats

Angus had lost track of his younger brother through the years. He'd been too busy trying to clear the jungles of Vietnam out of his brain. And now Earl is dead, his body found on the Manhattan waterfront, in one of the West Village's notorious gay cruising areas. Recent photos of Earl before he died show a sweet, laughing face, surrounded by the feathery blond curls of a cherub. His diary reveals a life on the street, a needle in his arm, his body wracked with drugs paid for by men wanting love in return. Angus's grim journey into his brother's brief life leads him to a dark corner of society he never knew existed, and the dark corners of his own soul he wishes he could forget. When originally published, A Brother's Touch was lauded and condemned. Now 30+ years after its first printing, this timeless story is more vital and readable than ever. 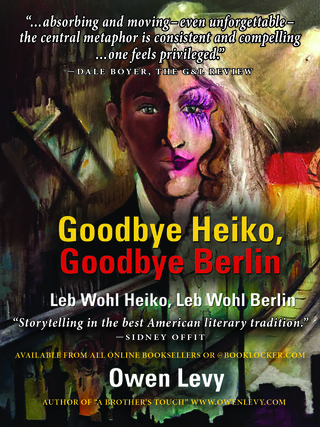 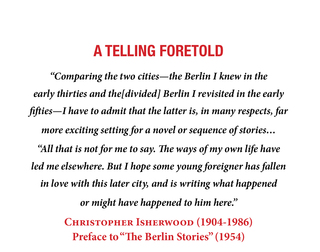 Christopher Isherwood's collections of stories inspired by the years he lived in Berlin during the 1930's was reinterpreted in the stage musical Cabaret. His stories re-fashioned for both the stage and film have been one of the 20th Century's most celebrated literary transformations.
Gay Love in the Time of the Cold War (13.9 KB)

Unconventional romance narrated by an American expatriate who lands in Berlin Germany just as Cold War tensions are easing and the infamous Wall is soon to be no more. His infatuation with an East Berlin wunderkind Heiko takes him on a long journey of self-discovery as Heiko undergoes a transformation that in some ways parallels the dramatic changes his reunited country experiences in one of the swiftest social and economic transitions ever achieved in modern times. A Divided Germany is once again united. But the ramifications of that change bring good and bad consequences. Heiko no longer living with the restrictions of communist East Germany embarks on a personal and professional path of self-reinvention becoming a much sought out international fashion stylist and companion to African royalty. The specter of the emerging AIDS crisis eventually becomes an unavoidable reality. Goodbye Heiko, Goodbye Berlin is the first English-language novel depicting the East German cultural underground and the thriving gay scene on both sides of the infamous Wall. The narrative also touches upon Germany's brief brush with East African colonization and its legacy.